From Geneva, Switzerland came the breaking news at about 3pm today, Monday, 15th February, 2021 – Nigeria’s Ngozi Okonjo-Iweala had finally been appointed as the next Director-General of the World Trade Organisation, WTO.

The tweet from WTO’s Official Twitter account, @wto, was long expected; in fact since two Fridays ago, when Yoo Myung-hee, the South Korean candidate who was contesting with the Nigerian for the position, dropped out of the race, it effectively opened the door for Okonjo-Iweala to become its head. The special process that ended today began last September, with eight highly qualified candidates from around the world.

Sixty-six year-old Dr. Okonjo-Iweala makes history as the first woman and the first African to lead the 26-year-old organisation, whose General Council members made history in agreeing by consensus to select her as its seventh Director-General. 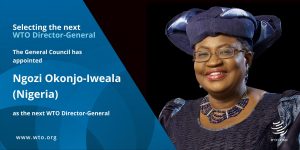 The road to the Geneva, Switzerland headquarters of the WTO has indeed been long and tortuous, marked with the usual international intrigues for such top positions; but sweet is the song of victory for another Nigerian who has shown she is eminently qualified to occupy the position. Geneva, the home of the world trade body, is a unique place, with many United Nations and other international organizations, sited there. The Centre William Rappard (CWR) is the name of the building that has been home to the WTO Secretariat since the organisation was established in 1995 and that revered building will be officially home to Okonjo-Iweala for the next four years.

She was recommended by top WTO officials to lead the Geneva body last October, after being judged to have had majority support among members, but the appointment was blocked by the United States under the Trump administration. Following Donald Trump’s defeat in the US Presidential election and the swearing-in of Joe Biden as President on 20th January, the body language of the new US administration was clear that Okonjo-Iweala was the preferred candidate; hence the pulling out of South Korean Trade Minister Yoo Myung-hee as the only other remaining contender. Expectedly, US President Joe Biden swung in behind Okonjo-Iweala’s candidacy and so here we are.

WTO has been without a Director-General since last August when the Brazilian career diplomat Roberto Azevedo stepped down, a year ahead of schedule. The process of selecting one of eight candidates to succeed him was expected to have ended last November, but for US President Donald Trump’s blocking the consensus to appoint Okonjo-Iweala.

The General Council agreed on 31st July 2020 that there would be three stages of consultations held over a two-month period commencing 7th September. During these confidential consultations, the field of candidates was narrowed from eight to five and then two. On 28th October, General Council Chair David Walker of New Zealand informed members that based on consultations with all delegations, Dr. Okonjo-Iweala was best poised to attain consensus of the 164 WTO members and that she had the deepest and the broadest support among the membership. At that meeting, the United States was the only WTO member which said it could not join the consensus.

The consultation process undertaken by the Chair and facilitators was established through guidelines agreed by all WTO members in a 2002 General Council decision. These guidelines spelled out the key criteria in determining the candidate best positioned to gain consensus is the “breadth of support” each candidate receives from the members. During the DG selection processes of 2005 and 2013, breadth of support was defined as “the distribution of preferences across geographic regions and among the categories of members generally recognized in WTO provisions: that is (Least developed countries), developing countries and developed countries”. This same process, agreed by all members in the General Council in 2020, was strictly followed by Chair Walker and his colleagues throughout the 2020-21 DG selection process.

As is expected, congratulatory messages have been pouring in for the new Number One Trade Czar of the universe.

President Muhammadu Buhari said in his message that he has no doubt that the former Finance Minister will excel in her new position as Director-General of the World Trade Organisation.

President Buhari, on behalf of the Federal Government and all Nigerians, warmly felicitated with Dr. Okonjo-Iweala on her election which he says is bringing joy and more honour to the country, saying that her track record of integrity, diligence, and passion for development will continue to yield positive results and rewards to mankind.

The Nigerian president affirmed that Dr. Okonjo-Iweala, who over the years set major records of economic reforms in Nigeria as Minister of Finance, and later Minister of Foreign Affairs, will excel in her new position and validate the global mandate of repositioning and strengthening the multilateral institution for the greater good of all.

The Chairman of WTO’s General Council, Mr. David Walker of New Zealand who, together with co-facilitators Amb. Dacio Castillo of Honduras and Amb. Harald Aspelund of Iceland, led the nine-month selection process, described the moment as significant.

He said: “On behalf of the General Council, I extend our warmest congratulations to Dr Ngozi Okonjo-Iweala on her appointment as the WTO’s next Director-General and formally welcome her to this General Council meeting. Dr Ngozi, on behalf of all members I wish to sincerely thank you for your graciousness in these exceptional months, and for your patience. We look forward to collaborating closely with you, Dr Ngozi, and I am certain that all members will work with you constructively during your tenure as Director-General to shape the future of this organization.”

In the same vein, President of the European Central Bank and former Chair and Managing Director of the International Monetary Fund, IMF, Christine Lagarde, from her Twitter handle, @Lagarde, extended her own message, saying: “Congratulations to my friend Ngozi Okonjo-Iweala on becoming the first female Director-General of the @wto. I’ve known Ngozi for many years. Her strong will and determination will drive her to tirelessly promote free trade to the benefit of people worldwide”.

In a statement after her appointment, the new WTO DG said a key priority for her would be to work with members to quickly address the economic and health consequences brought about by the COVID-19 pandemic.

She declared: “I am honoured to have been selected by WTO members as WTO Director-General. A strong WTO is vital if we are to recover fully and rapidly from the devastation wrought by the COVID-19 pandemic. I look forward to working with members to shape and implement the policy responses we need to get the global economy going again. Our organization faces a great many challenges but working together we can collectively make the WTO stronger, more agile, and better adapted to the realities of today.”

Prior to her new appointment, Ngozi Okonjo-Iweala, popular with the acronym NOI, has been the Board Chairperson of Gavi, the Vaccine Alliance, since 1st January 2016. She has twice served as Nigeria’s Finance Minister, most recently between 2011 and 2015 – a role that encompassed the expanded portfolio of the Coordinating Minister for the Economy. In 2006, she served as Foreign Affairs Minister. She has also held several key positions at the World Bank, including as Managing Director, and serves on the boards of Twitter and Standard Chartered Bank PLC.

In 2013, she was elected Chairperson of the Governing Board of African Risk Capacity, a specialised agency of the African Union established to help African governments improve their capacity to better plan, prepare and respond to extreme weather events and natural disasters.

She holds a Bachelor’s degree in economics from Harvard University and Ph.D in regional economics and development from the Massachusetts Institute of Technology (MIT). She has honorary degrees from over a dozen universities worldwide.

The World Trade Organization (WTO) is the only global international organization dealing with the rules of trade between nations. At its heart are the WTO agreements, negotiated and signed by the bulk of the world’s trading nations and ratified in their parliaments. The goal is to ensure that trade flows as smoothly, predictably and freely as possible.

The WTO has many roles: it operates a global system of trade rules, it acts as a forum for negotiating trade agreements, it settles trade disputes between its members and it supports the needs of developing countries.

There are a number of ways of looking at the World Trade Organization. It is an organization for trade opening. It is a forum for governments to negotiate trade agreements. It is a place for them to settle trade disputes. It operates a system of trade rules. Essentially, the WTO is a place where member governments try to sort out the trade problems they face with each other.

Where countries have faced trade barriers and wanted them lowered, the negotiations have helped to open markets for trade. But the WTO is not just about opening markets, and in some circumstances its rules support maintaining trade barriers — for example, to protect consumers or prevent the spread of disease.

At its heart are the WTO agreements, negotiated and signed by the bulk of the world’s trading nations. These documents provide the legal ground rules for international commerce. They are essentially contracts, binding governments to keep their trade policies within agreed limits. Although negotiated and signed by governments, the goal is to help producers of goods and services, exporters, and importers conduct their business, while allowing governments to meet social and environmental objectives.

The system’s overriding purpose is to help trade flow as freely as possible – so long as there are no undesirable side effects – because this is important for economic development and well-being. That partly means removing obstacles. It also means ensuring that individuals, companies and governments know what the trade rules are around the world, and giving them the confidence that there will be no sudden changes of policy. In other words, the rules have to be ‘transparent’ and predictable.

Trade relations often involve conflicting interests. Agreements, including those painstakingly negotiated in the WTO system, often need interpreting. The most harmonious way to settle these differences is through some neutral procedure based on an agreed legal foundation. That is the purpose behind the dispute settlement process written into the WTO agreements.

The WTO is run by its member governments. All major decisions are made by the membership as a whole, either by ministers (who usually meet at least once every two years) or by their ambassadors or delegates (who meet regularly in Geneva).

The WTO agreements cover goods, services and intellectual property. They spell out the principles of liberalization, and the permitted exceptions. They include individual countries’ commitments to lower customs tariffs and other trade barriers, and to open and keep open services markets. They set procedures for settling disputes. These agreements are not static; they are renegotiated from time to time and new agreements can be added to the package. Many are now being negotiated under the Doha Development Agenda, launched by WTO trade ministers in Doha, Qatar, in November 2001.

WTO agreements require governments to make their trade policies transparent by notifying the WTO about laws in force and measures adopted. Various WTO councils and committees seek to ensure that these requirements are being followed and that WTO agreements are being properly implemented. All WTO members must undergo periodic scrutiny of their trade policies and practices, each review containing reports by the country concerned and the WTO Secretariat.

The WTO’s procedure for resolving trade quarrels under the Dispute Settlement Understanding is vital for enforcing the rules and therefore for ensuring that trade flows smoothly. Countries bring disputes to the WTO if they think their rights under the agreements are being infringed.

Judgments by specially appointed independent experts are based on interpretations of the agreements and individual countries’ commitments.

The WTO maintains regular dialogue with non-governmental organizations, parliamentarians, other international organizations, the media and the general public on various aspects of the WTO and the ongoing Doha negotiations, with the aim of enhancing cooperation and increasing awareness of WTO activities.